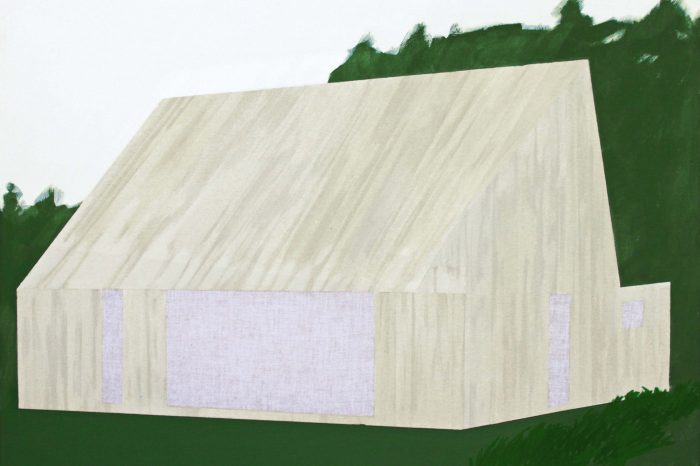 Young painter Nina Čelhar has been exploring modern residential architectural images for several years. While her recent work portrays primarily motifs of minimalist facades and modernist houses, combined with untamed shrubbery, this exhibition focuses on interiors. In the new series, she is interested in objects, motifs that define such spaces, create a specific atmosphere and indicate the subtle presence of man, communicating through the very emptiness and airiness of the depicted rooms. Her canvasses focus on walls enclosed in plywood, which abstract the intimate space through the impression of unified materiality, making it harmonious and peaceful. The author adds individual smaller potted plants with vital green leaves, hinting that the hand that waters is nearby. Even though the human figure itself is absent, its presence is clearly evident in the centralization of the scenes around manmade elements, around one’s shelter, around one’s private sphere, which is not merely the opposite of public, but the place of thought. With their clean artistic language, truncated light colour scale, ignorance of shadows, thoughtful compositions and selected views, the canvasses thus remain perfectly balanced, calm, clean and quiet. The rhythmic geometry of the surface, represented by thoroughly considered composition and the plywood pattern, extends our real space while at the same time presenting the image to the viewer as a classic window into an imaginary world. As the glances into the residential areas do not include the floor, the glimpses almost hang in the air, with such perspective offering an opportunity for recess, cosiness in the space that reflects a home, but none of the personal characteristics of the original inhabitant. According to the artist, in one’s home, one seeks the very thing one is lacking in everyday life. With selected excerpts, Čelhar presents the modern home as a scene of balance and safe grounding, reflecting the attitude towards the environment, the concurrent culture of living, our values and goals, as well as hidden desires.

Nina Čelhar (1990) graduated in painting from the Academy of Fine Arts and Design (ALUO) in Ljubljana, under Associate Professor Marjan Gumilar (2012). Currently she is concluding her M.A. studies in painting at ALUO. She perfected her knowledge for a year at the Hochschule für Grafik und Buchkunst in Leipzig, Germany. In 2012, she received the ALUO Award for Special Study Achievements, then the special ESSL Collector’s Invitation in 2015. She has put on solo exhibitions in Ljubljana, at the Bežigrad Gallery (2014) and the ZDSLU Gallery (2015), at UGM Studio in Maribor, Stolp Škrlovec (2015) in Kranj, and the Tir Gallery (2016) in Solkan. She has participated in many group exhibitions in Slovenia, Germany, Austria, Greece and Italy.