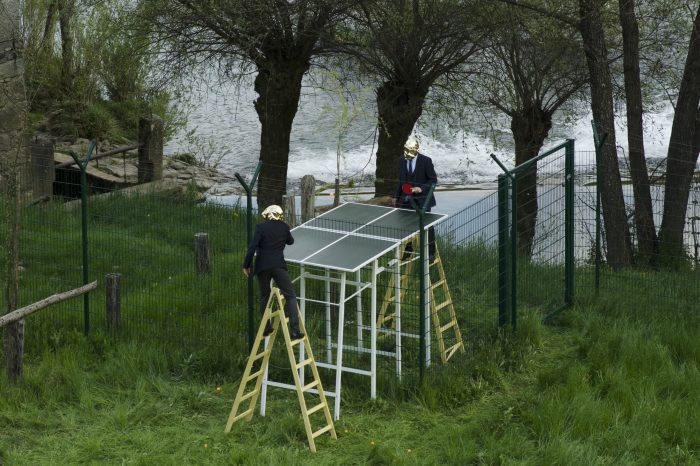 The year was 1968. It wasn’t May. It was April. It wasn’t in Paris. It was in Lyon. Antun “Tova” Stipančić, the “golden left of Croatian sports”, and Edvard Vecko, Slovenian table tennis legend, found themselves face to face with an unbeatable Swedish duo during the final match of the European Championship in doubles. The Swedes had not lost a single match in the last two world championships. Tova recalls a carefree match, played without expectations and for fun. The Slovenian-Croatian double beat their opponents in three of the four sets, scoring 21:14 in the last and earning the title of European Champions.

What is the legacy of April 1968? Did a Croat and a Slovenian take home the win, or was the championship won by a pair of Yugoslavians? Was it a victory of two republics or of a federation of republics? The government of ’68 would say, each to the best of their abilities, to each according to their needs, as long as fraternity and unity remain unquestioned. There could be no doubt that there was then but one Government. Today, conversely, there can be no doubt that there are two. What is Slovenian, cannot be Croatian, and what is Croatian, cannot be Slovenian. However, what to do when there are so many things both governments claim to be theirs and theirs alone. The solution of this conflict lies in the resolution of these issues, because that would end up actually putting an end to them. National unity cannot be maintained without constantly instituting physical and mental borders. A unified people cannot exist without constantly excluding foreigners (immigrants) and locals (the Roma People, the Erased). An endless process of resolution is preferred to a definitive solution.

This is the game both governments force upon their citizens. The once victorious Tova and Vecko are no longer a double, nor are they individuals. They are nothing more than the bureaucratic embodiment of power engaged in passing a ball across the border. It takes care to observe proper etiquette and not take the game too seriously because it knows that there can be no winner while it is being played. It is mostly played on the border, sometimes elsewhere – in the Hague and now in Luxembourg. But it is above all a carefree match, played without expectations and for fun.

Playing ping-pong across the fence at the Slovenian-Croatian border may seem grotesque. Playing a game on an object, which obstructs the crossing of the border for unwanted people, an object, which makes it difficult for locals to access the Kolpa river, an object, which hinders tourism as one of the rare industries of the Bela krajina region, and, last but not least, an object, which artificially divides the biosphere, limiting the natural habitat of the wildlife. All with the purpose of preventing the “illegal” crossing of the Schengen border. The fence is ineffective, as numerous individuals continue to cross the border on a daily basis, however, a lot of them die on the way, or something happens to them, between the bears and the Croats. As a matter of fact, they are less afraid of Croatian bears than they are of Croatian authorities.

Why then, should one play on this object, which has earned hatred on all sides, and has probably directly caused the death of many? Because it’s all a game, even if it is a covert one. “The game” is the term that refugees use on the Balkan route when they refer to their attempts at crossing the Croatian border in the hope of applying for asylum once they reach Slovenia. If the Croatian law enforcement authorities catch them, it’s “game over”. There are reliable reports about how they employ systematic violence against refugees. Last year, Croatian police officers in Slavonia shot two twelve-year-old boys in the face, and the court later ruled that this was an act of “self-defense”.

Then it comes to a “push back”, and the migrants are returned to the Bosnian or Serbian border by Croatian authorities. And “the game” begins anew. On the way to Europe, the Croatian border has the status of the last level in this game. A “pushed back” migrant thus has no other option, but to start over again.

Since last year, the returning of migrants to Croatia has been conducted by the Slovenian police as well, despite the human rights ombudsman’s protests. Slovenian authorities act selectively, bureaucratically, and less violently, but still. At the border a translator helps to determine who is eligible to apply for asylum, and who is not. The rejected migrants are handed over to Croatian authorities, from where they are sent back to so-called level one. With all this, the fence is a failed investment, which only encourages intolerance of the Other.

On an associative and methaphorical level, Ping Pong symbolizes the bureaucratic game played between European countries. By equating travellers to a small orange ball, trapped between two rackets and under the constant threat of falling off the table (which is ultimatelly the players’ goal), it is also a symbol of the central and somewhat general leftist-humanist critique of Europe’s immigration policy. In it, innocent people are no more than cogs in the cold and impersonal state apparatus. However, at the moment of its formulation, such a critique reveals the helplessness that underlies it. A weak cry at the sight of far-off of events that we believe ourselves to be included in, yet feel somehow removed from. It is an ironic take on the workings of the state that feels like a final desperate expression of dissent. This structure, within which we are trapped, and consequently in the perpetuation of which we are complicit, is too strong for us to tackle. All we can do is ironically adress the primary culprit, the great abstraction of the State.

Perhaps this feeling of helplessness is precisely what lies beyond the metaphorical aspect of this work. If the latter is concerned with a banalisation of state practices—European immigration policy being reduced to a game played between countries—this game, although far from identical, overlaps somewhat with “the game” played by those travelling from Bosnia to Slovenia. The game is characterised by a set of rules that enable its recreation in a variety of ways: it is a system of differences and ratios allowing for countless permutations, changes and transpositions. This holds true in both cases despite the two actual systems having nothing in common. While the playing field of the national game is built by laws, regulations, informal directives, political pressure, police strategies and tactics, public opinion and its many phantasms, “the game” is played in forests from Bosnia to Slovenia, on various modes of transportation, in rivers, passage points, hiding places, with (un)friendly locals, Croatian and Slovenian police officers, their batons, their blackmailing, barbed wire, fences, violence and deportation. Although they may appear to be one and the same, one and the same game, the ball’s story is dramatically different from the paddle’s.

Calling it “the game”, a term coined by the travellers themselves, is a testament to the regularity and repetitiveness of this segment of the journey, brought about by Europe’s border regime on the so-called Balkan Route. It does far more than prove its objective conditions. It proves how this extremely violent situation has come to be normalised, even for those undergoing it. “The game” signifies simply the final and hardest stage before the finish line and nothing more. The same could be said of the national game that we are forced to play as citizens: its banalisation is a testament to the normalisation of behaviour that we had so far not witnessed, at least not at a local level. Until now we have been able to reproach the imperialist tendencies and racist practices of all the major players in the field of global politics from a liberal leftist political high horse (only having a few past mistakes on our conscience). That time has passed. Facing this issue is a matter of public consciousness, and we are witnessing how the mechanisms put in place to address it are slowly changing; mainly how the situation regarding border crossing and the accompanying police procedures have come to be seen as normal. The apparent contradiction between the ever increasing militarisation of the border and the ease with wich we as citizens can play ping pong across the border fence is, in fact, an illusion. Both are part of the same system of violence and exclusion. Above all, they are the foundation of an emerging consciouseness (or a suppression) that is necessary for the functioning of these systems. Some version of our future features people continuing to drown in the Kolpa river while others happily enjoy a picnic on its bank.

Artist name: trough various approaches, investigates the subculture of graffiti and the broader cultural environment. In his works he considers the relationship between legal and illegal acts. Artist’s public interventions are always subject to formal and substantive devising and his unconventional ideas.