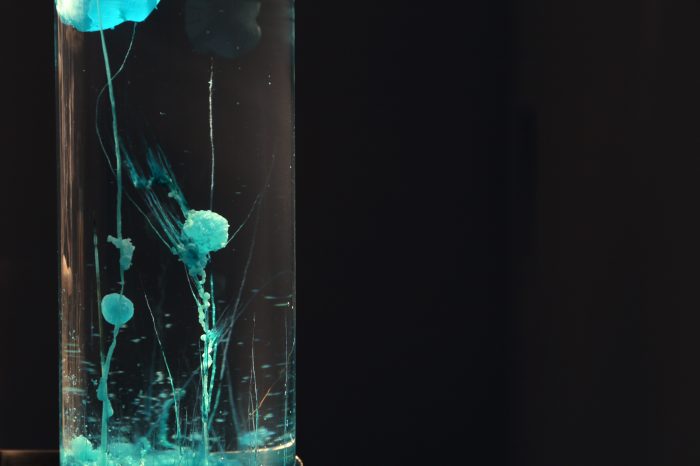 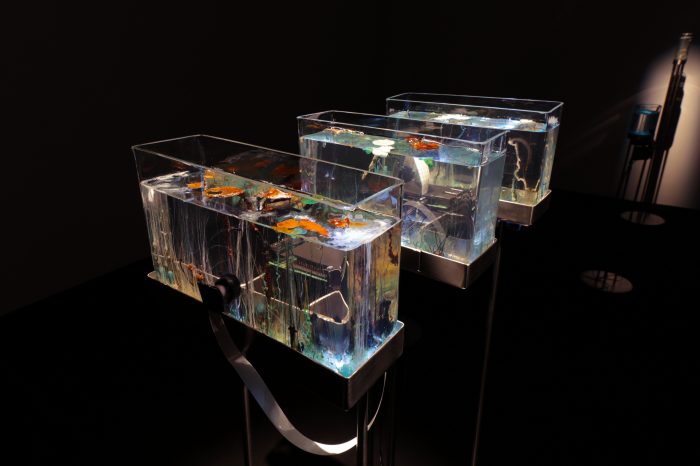 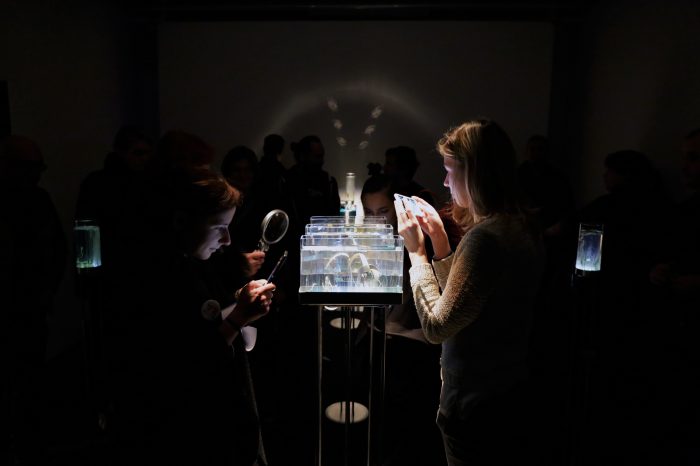 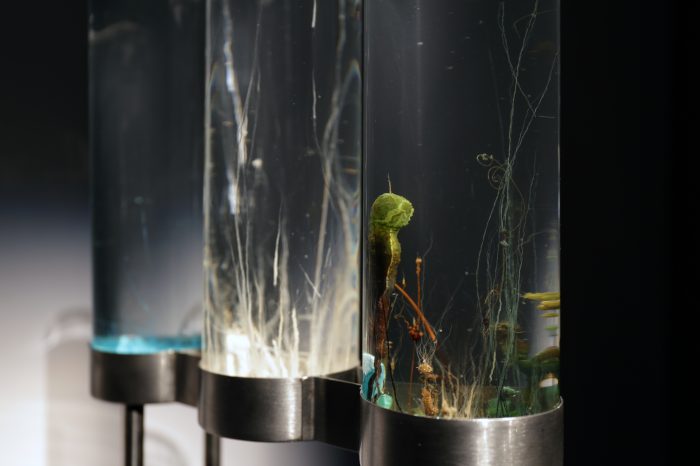 The colourful biomimetic morphologies of chemical gardens are a fascinating imitation of life. Key to these marvellous structures, which spent decades, locked away in an alchemist’s cabinet of curiosities, is a renewed study of chemobrionics, a field combining chemistry, physics, biology, and materials science. Chemobrionics denotes self-propagation, the growth of chemical structures with a tendency to increase concentration gradients under conditions of osmotic pressure and buoyancy. Scientists are on a new quest to find in these abiotic formations the root of biotic protocells. Therefore, in the last few centuries, chemical gardens have progressed from being a counterfeit of biotic life to being the original; from childlike imitations of life to the sheer origin of life on Earth.

Time Displacement is a durational performance which uses chemical gardens as stained glass pictures to explore the optics that change the cultural perception of the world and the practice of differentiating between organic and inorganic matter. This changed perception of matter is made possible by means of interdisciplinary research, which contributes to a more holistic understanding of (geological, chemical, social, political) processes in the world. Although not a new exploration, chemical gardens are only now emerging as an unexpected research area and a prime example in chemistry of self-organising non-equilibrium processes that create complex structures, combining chemistry, fluid dynamics, and materials science. If research in the field of chemobrionics is legitimated by the development of new materials for commercial purposes, Time Displacement encourages such study of materials, which maintains a fascination with the potential development of nanomaterials without any commercial implications.

A durational performance in an open laboratory takes the viewpoint of the history of science to talk about findings, which are primarily a product of the cultural environment not just a result of meticulous research.

The chemical-acoustic live experiments in the installation are comprised of several small chemical garden formations in a water glass (sodium metasilicate) solution, to provide an insight into research on the origin of life and on chemical processes, which unfold at a pace that is rapid, yet still too slow to be discernible to the naked eye. The chemical reactions, where visible changes take between 8 and 48 hours, are monitored by cameras to detect changes in colour and in shape by means of a microcontroller. The changes affect the code for live sound generation, and slowly work to alter the generative drone composition pervading the gallery space. A sound art installation which goes beyond the human perception of time calls for a perspective that considers the multiple dimensions of temporal rhythms in space.

More about the history of chemical gardens

The history of chemical gardens has always been closely intertwined with experiments juxtaposing the propagation of forms in chemical reactions with biological forms. In the early 19th century, scientific research attempted to prove that biological life had evolved from the inorganic worlds of physics and chemistry: from chemical gardens and osmotic forces, from diffusion and other physical and chemical mechanisms. Scientists’ endeavours in plasmogeny and synthetic biology were refuted when, in the 20th century, genetics established the complexity of hereditary cells by isolating DNA. In the 21st century, on 29 May 2015, a group of 21 distinguished scientists issued a paper entitled From chemical gardens to chemobrionics, reiterating a call for research into the principles of self-assembling structures, to produce– as they suggest – new insights into the origin of metabolism in Earth’s early geological periods.

Robertina Šebjanič (SI)  based in Ljubljana/ is working in the cross field of art – technology – science.  Her art – research focus is since several years oriented towards the exploration of water habitats and marine life which serves as a starting point to investigate and tackle the philosophical questions on the intersection of art, technology and science. Her ideas and concepts are often realized in collaboration with others, through interdisciplinary and informal integration in her work. She is a member of Hackteria Network and Theremidi Orchestra. She got an Honorary Mention @Prix Ars Electronica 2016 for project Aurelia 1+Hz / proto viva sonification, STARTS2016 nomination nomination for project Time Displacement  / Chemobrionic Garden and nomination for the White Aphroid award for project Aquatocene. Robertina is part of  SHAPE platform 2017. She performed / exhibited at solo and group exhibitions as well as in galleries and festivals: Ars electronica Linz,  Kosmica_Mexico City, Le Cube_Paris, Art Laboratory Berlin, Mladi Levi_Ljubljana, Piksel_Bergen, Device art 5.015 Klovičevi dvori_Zagreb & Eastern Bloc_Montreal, Eyebeam_New York, PORTIZMIR#3_ Izmir, Kiblix festival_Maribor, Gallery Kapelica_Ljubljana and more …

Aleš Hieng – Zergon is a chemical engineer by profession as well as a DJ, producer of electronic music and sound artist who also works in the field of audiovisual performances and in the vast field of DIY electronics. He is interested in club music as well as in sonic and audiovisual experimentations. His sounds range from deep house and techno to idm, noise and abstract drone music. He is a member of Synaptic Crew since 2003. He’s been releasing audio tracks on Chilli Space compilations since 2007. In 2012 he released Escalator EP on Synaptic Pathways label, and in 2016 his track got featured on a compilation released by Slovenian  net-label Kamizdat. He’s a co-author of an audio-visual performance echo 10-9 together with Robertina Šebjanič.

Ida Hiršenfelder [beepblip] is a Ljubljana, Slovenia based media art curator and sound artist. Her focus research areas are media archeology and archives of media art. She is a member of Theremidi Orchestra noise collective. She works at the Museum of Contemporary Art Metelkova, +MUSM on projects related to digital archives. In collaboration with Saša Spačal she is creating a series of sonoseizmic installations (Crust, 2014, Earth, 2015). With Spačal she is also a co-initiator of ČIPke Platform for Women with a Sense for Science, Technology and Art. Time Displacement / Chemobrionic Garden in collaboration with Robertina Šebjanič and Aleš Hieng – Zergon has been exhibited at Ars Electronica festival (2016) Radical Atoms exhibition in Linz and Device_art 5.016 exhibition in Montreal. radioCona selected her composition AM_on_FM / sine_wave for premier works of radioCona:wolFMoon project.